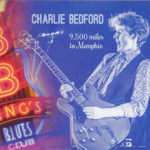 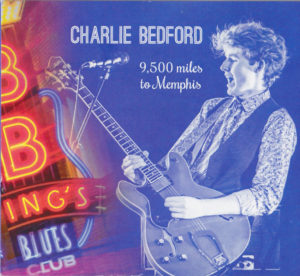 It’s my great pleasure to review this CD for a young up-and-coming musician from the land Down Under, Charlie Bedford. Everyone who meets this young man is impressed with his talent, demeanour and personality. Seeing him on stage is to be drawn into someone who is young at heart but old in soul.

My first introduction to Charlie was during the 2018 International Blues Challenge in Memphis. Not through meeting him, but through Facebook posts. All who met him, made comment about the experience. He gave people koala bears, Australian flags and his personal cheers to everyone who he spoke with. I reached out to him and asked if he had a few tunes he could send my way for our radio show. Once I heard him, I had to meet him in person and began following his musical career.

In 2019, Charlie was back in Memphis as the youth act representative for the Melbourne Blues Appreciation Society. My husband Bill and I, feel lucky that we came across Charlie the first night in Memphis. Accompanying him, was Gary (his father), who has embodied a great love of life and music. The encouragement, support and love we saw shared between them was nothing short of wonderful and heart lightening. Charlie gifted me his new CD, a koala bear and an Australian flag. I squealed with delight!

About the CD – Charlie is a fabulous songwriter, but for this debut album he chose some great covers by his role models BB King, Albert Collins, Albert King, Buddy Guy, Tony Joe White & Louis Jordan. The CD features Charlie on his guitar and vocals. Clean, beautiful, perfect for showcasing who he is as a musician. Brain Baker at the Bakery, thanks for getting this done for Charlie!

Though young, Charlie’s vocal ranges are outstanding. The first 4 cuts feature his higher ranges and my fav is How Blue Can You Get (cut 1). In As the Crow Flies (cut 5) we get to hear his lower register. Charlie’s vocals are smooth and enjoyable. His guitar playing is stellar! We watched as the room at the Blues Hall watched mesmerized by his stage show and sound. You  couldn’t move for all the bodies that were there to see him perform.

Back to the CD – Two cuts, which we also got to hear live, Early in the Morning & Let the Good Times Roll – work great for audience participation. In the recording, you get a hilarious “Get out of here” inserted. Listen closely or you’ll miss it.

If you want to support new blues artists coming up through the ranks, go and get Charlie’s CD – 9,500 miles to Memphis, like his Facebook page (https://www.facebook.com/Charlie.Bedford.6) and follow where he’s playing. He will be back to America again. Hope we can have him come to Abbotsford for a show!  Canada, you will love this artist!